QUOTE: ‘The question isn’t who’s going to let me; it’s who is going to stop me.”– Ayn Rand, author

Who run the world? Girls! So says Beyoncé and who are we to doubt Queen Bey?

Climbing the corporate ladder is no mean feat but the times, they are a changin.’ Believe it or not, Ireland is one of the word leaders when it comes to women’s position in the workplace, ranking fifth in the world. Boom! Since 2012, the employment rate for women has increased each year to 59.5% in 2016.

Mind the gap though! Although more women are working than ever before, there still exists a massive discrepancy in wage parity. In fact, the World Economic Forum tells us that it will be another 118 years before women have the same career prospects as men. Enterprise Ireland is kicking it up a notch in the equality department, recently establishing the Female Entrepreneurship Unit with the aim of accelerating the growth of female-led start ups. A fund of €150K was devoted to female-only development programmes like Going for Growth and 15 funds of €50K were awarded to burgeoning entrepreneurs with business acumen and digital savvy. At the Style Edit, we’re a glass half-full bunch so we’ve turned to our favourite girl boss stories for some serious career inspo. Nothing’s going to stop us now.

QUOTE: “Some call it arrogant, I call it confident.” Beyoncé, Ego

The Irish answer to MacGyver, Jane Ní Dhulchaointigh created a mouldable silicon rubber called Sugru that sticks things back together. Wood, glass, metal and plastic – you name it – it repairs it. Describing herself as an ‘eco-pragmatist,’ Ní Dhulchaointigh wanted to make a product that counteracted our disposable culture of throwing things out. Just last month Sugru released a new family-friendly product. We wonder, does it work on a broken heart?

Founder of Cara pharmacies, Ramona Nicholas is first up on our list. Entirely self-made, Nicholas has grown her business from its humble beginnings in 2002 to a giant behemoth of 13 pharmacies and two Cara home lifestyle stores in the northwest. Not only is Nicholas a seriously savvy business woman, she makes sure she’s giving something back with stints on The Secret Millionaire and Dragon’s Den.

If the name Dr. Sarah Bourke doesn’t ring a bell, it should. One of the most popular films of last year, Hidden Figures featured a group of African-American women who worked at NASA. Widely written out of history, most people never hear about the women working in the space industry. So we were thrilled to hear about our own cosmic queen Dr. Bourke who scooped The EU Prize for Women Innovators – one of the world’s most prestigious awards. Her company Skytek was honoured by NASA for its groundbreaking software. Developing the world’s first international procedure viewer which stores and manages space walks and emergency procedures, this has been used by the International Space Station for over a decade. Oh, and she only broke ground in the emergency response services within the naval and aircraft industries as well. As you do. Well, as she does.

QUOTE: “Think like a queen. A queen is not afraid to fail. Failure is another steppingstone to greatness.” Oprah Winfrey, media mogul.

Female role models are slowly but surely emerging in the media and onto our TV screens, shaking things up in the industry and striving for gender parity in wages. In a previous life as an actor, the majority of my auditions were for one-dimensional female characters, serving as vessels for the protagonist males. Now, a multitude of kick-ass women are lighting up our goggleboxes. Tina Fey broke the mould in the industry, writing hilarious sketches for Saturday Night Live and cult classic Mean Girls, following up with 30 Rock and Unbreakable Kimmy Schmidt. Lena Dunham wowed us with her zeitgeisty Girls – a gritty, depiction that eschews the glossed-over version of being a woman we’re used to seeing from shows like Sex and The City. The iron woman, Clare Underwood (often known as the modern Lady Macbeth) shows the complexity of women rising through the ranks of politics in House of Cards, as does Julia Louis-Dreyfus’ Selina Meyer in Veep. Other ass-kicking females we love are fierce AF Daenerys Targaryen (Game of Thrones’ Khaleesi), basically everyone in Orange is the New Black, June (Offred) in The Handmaid’s Tale and Dr. Foster as the titular role in the eponymous BBC drama.

QUOTE: “I think the key is for women not to set any limits.”  Martina Navratilova, tennis player.

Lend us your ears

If you’re looking for inspo, look no further. We’ve got you covered. These three podcasts are essential for any female entrepreneur looking to rise within the ranks:

From the girl who invented the hustle, this one does exactly what it says on the tin. Major goals here from the glam queen who invented Nasty Gal from her bedroom.

Described as ‘weekly interviews with boss babes’ we loves this no-holds-barred podcast with women who took the leap of faith in business, and won.

She Did it Her Way with Amanda Boleyn

This podcast is entrepreneurship 101, offering in-depth insights with the trailblazers of innovation across the world. 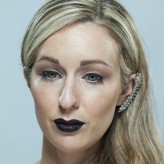